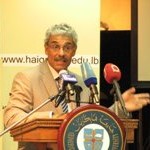 ...Mr. Alan Kairouz was to be in charge of the Student Life for a period of one year as the highest in the hierarchy of Student Life.

The University had newly recruited Mr. Kairouz. It was to be his first year, all alone with marginal help from the University Sports Coordinator.

It was a gross challenge Mr. Kairouz had to overcome. Both the students as well as the staff were all new for him. The age difference between him and the students was not big enough to give a strong leverage on his behalf. Most of the staff and faculty had been at HU when Mr. Kairouz was a student at HU. This would create some practical difficulty for them to accept Alan as a colleague rather than an ex-graduate.

I remember we went on a camping before my departure with a group of HU students. My intention was to create a sort of a relation between the students and Mr. Kairouz. Indeed there was an unease regarding Mr. Alan’s recruitment as he was to be the first full-time non-Armenian Student Life Office member at Haigazian University.

Throughout the year we were in contact with each other. I was supportive to Alan – from the north end of Europe. Imagine how much support you could give from such a distance.

In June 2001 I came back to Haigazian and realized that Alan had won the battle in a better manner than I had expected.

During the past ten years I have come to witness several aspects of Mr. Kairouz.

Mr. Kairouz has been a kind individual, humane and an exemplary citizen, who avoids trouble, is positive and constructive in his approach, compromising for the sake of the public good.

The past decade of Student Life stand witness of the huge gap that exists between the HU Student Life of 2001 and that of 2011. It goes without saying that a lot of the progress and success we made at Student Life had a direct reason: Alan’s presence.

Alan has been a strong pillar of Student Life. His spirit has been on the same wavelength as that of HU.

In life in certain cases you end up having colleagues who come to office, do their job i.e. whatever is given to them to work on and leave. I take pride in asserting the fact that Mr. Alan Kairouz did not work like that. He did not come to office to do whatever he is supposed to do and leave. On the contrary he is proactive, and positively aggressive. He is innovative and observant. He took the initiative to improve, upgrade and come up with new projects to avoid stalemate and repetition. This work ethic and work approach is part and parcel of Mr. Alan’s value system. Alan helped me in setting the work standard of Student Life.

I have learned that in order for your job to develop and grow you have to make it a part of you and to put a part of yourself in your job. Mr. Alan used to leave his family and go on camping or mountain hiking, or a biking trip, or an extremes Club overnight caving and so many other activities with the HU students.

Indeed Mr. Kairouz made HU students bike from Tripoli to Beirut and to Sour, walk from Beirut to Anjar, climb the black peak  and for so many times!

Actually, only if you put your heart and thoughts in your work you end up organizing Orphans Fairs, children’s vaccination, blood donation, or renovating a school in a refugee camp or in a remote area of north Lebanon.

One cannot squeeze what Alan did during the last ten years at HU in a short recommendation. An equally impressive performance has been his interaction with students. The HU students were bonded to him. He was a true friend and help to many. One may think that at Student Life the athletes would go to Sahag, the girls would refer to Peggy, the Arabs would talk to Alan and the Armenians to me. I am happy to say that in multicultural HU the picture is not so. Alan had a large number of Armenian students, athletes, and female students who were closer to him than to any other member of the Student Life.

Alan has been a civic citizen at HU who made great effort in shaping the better citizens of Lebanon, and in better citizens I mean students who would clean up Hamra Street, or Bourj Hammoud or the seashore.

Alan inspired several students in different clubs. Some of his babies at HU are the Extremes, the Desert Streams, the Environmental, the Kickboxing club… to name a few.

I thank God that I had a wonderful colleague, called Alan Kairouz and worked with him for the last ten years.